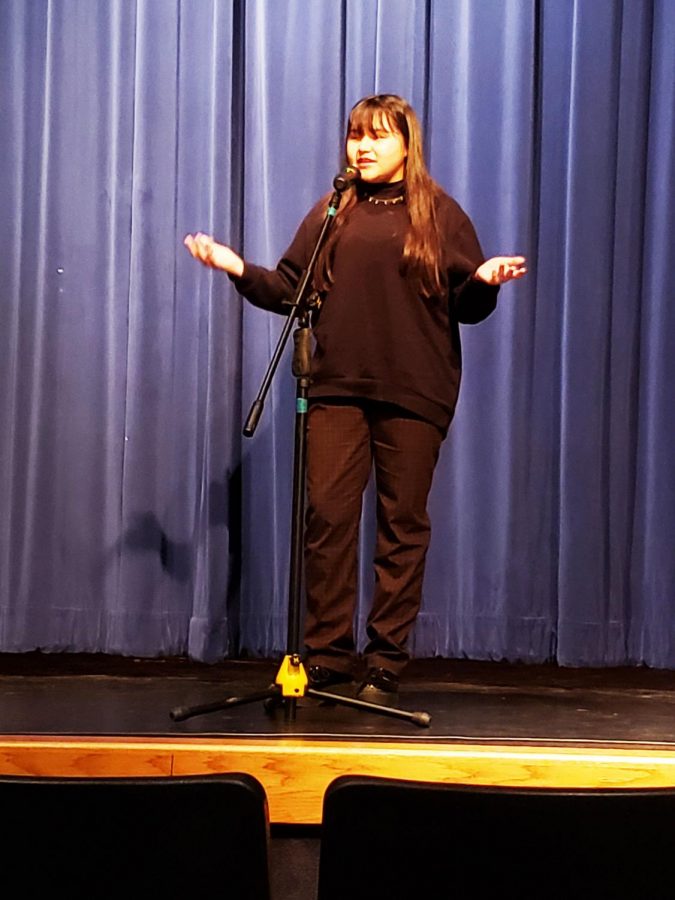 Escobedo chose to read “Song in a Minor Key” by Dorothy Parker, a poem about a woman who consistently visits a garden and patiently waits by a gate in hopes of seeing her husband who never returns.

“I decided to go with Parker’s poem because of the rhyme scheme, ability for movements, and my personal love for the trope,” said Escobedo.

She competed against junior Enoch Ashong, the other contestant and runner-up. They were both judged on campus by CI English teachers Mr. Nicholas Schlesinger, Mr. John Grennan and Ms. Dominique Rousseau on their ability to accurately recite the poem, assert physical presence and perform the poem passionately.

Escobedo’s love for poetry was ignited from her interest in literature overall and was immediately fascinated with the art when it was first introduced to her with Dr. Seuss in  elementary school. As many writers do, she uses writing as an expressive outlet in hopes of feeling a sense of tranquility after releasing any suppressed emotions or ideas. She also makes sure to document any pivotal or meaningful experiences she has.

“It makes me feel calm when I put my thoughts on things that are still too unknown or personal to tell a friend or sentimental when I record an experience for future Jas’s enjoyment,” says Escobedo.

Escobedo took fourth place in the county competition, which took place at the Oxnard High School Performing Arts Center on Feb. 4, with local poets and members actively involved in the arts as judges.

Along with the poem she read for the school contest, Escobedo also recited the pre-20th century poem “She Walks in Beauty” by Lord Byron, a poem that caught her attention due to its flow of alliteration and tone of admiration.

Despite not getting first place, Escobedo appreciated the learning experience and even cheered on for her fellow competitors, who she constantly found herself in awe of.

“I got fourth place, but the easy going atmosphere and fact that I participated in something where my every move, voice and confidence levels were judged made the experience fun,” said Escobedo.